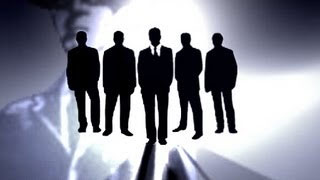 Men in Black (MIB), in American popular culture and in UFO conspiracy theories, are men dressed in black suits who claim to be government agents who harass or threaten UFO witnesses to keep them quiet about what they have seen. It is sometimes implied that they may be aliens themselves. The term is also frequently used to describe mysterious men working for unknown organizations, as well as various branches of government allegedly designed to protect secrets or perform other strange activities. The term is generic, used for any unusual, threatening or strangely behaved individual whose appearance on the scene can be linked in some fashion with a UFO sighting.

According to the accounts of those encountering them, Men in Black always seem to have detailed information on the persons they contact, as if the individuals had been under surveillance for a significant period of time. They have occasionally been described as seeming confused by the nature of everyday items such as pens, eating utensils or food, as well as using outdated slang, old cars or vintage styles of clothing. Reports indicate that they often claim to be from an agency collecting information on the unexplained phenomenon their subject has encountered. In other accounts, they seem to be trying to suppress information by trying to convince their target that the event in question did not happen. They have been described as behaving in either an exceedingly furtive manner or a completely outgoing one, with wide grins and disconcerting giggles. This observation might suggest that the "gigglers" were possibly, though not necessarily, pranksters, as various forms of unexpected, inappropriate, or even bizarre (as in robotic) behavior seem to be hallmarks of these mysterious beings.

More prosaically, paranormal researcher Jerome Clark cites Bill Moore, who asserts that "the Men in Black are really government agents in disguise ... members of a rather bizarre unit of Air Force Intelligence known currently as the Air Force Special Activities Center (AFSAC) ... As of 1991, the AFSAC, headquartered in Fort Belvoir, Virginia," and "under the operational authority of Air Force Intelligence Command centered at Kelly Air Force Base in Texas." Curiously, Moore also reports that AFSAC was inspired by the tales of Men in Black from the 1950's, and had nothing to do with those early accounts. Similarly, Clark notes that Dr. Michael D. Swords has speculated that the Barker/Bender Men in Black case (occurring shortly after the CIA-directed Robertson Panel issued its recommendations to spy on civilian UFO groups) might have been a psychological warfare experiment.