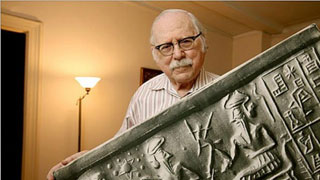 Zecharia Sitchin was born in Russia and raised in Palestine, where he acquired a profound knowledge of modern and ancient Hebrew, other Semitic and European languages, the Old Testament, and the history and archeology of the Near East. He is one of the few scholars who is able to read and understand Sumerian. Sitchin attended and graduated from the University of London, majoring in economic history. A leading journalist and editor in Israel for many years, he now lives and writes in New York. His books have been widely translated, converted to Braille for the blind, and featured on radio and television. The first book, THE TWELFTH PLANET, refers to the probability that there is one more planet in our solar system. That there are twelve members, counting sun, moon and ten planets, not the nine we know of.

That people from that planet came to earth almost half a million years ago and did many of the things about which we read in the Bible, in the book of Genesis.

But that was not my starting point at all. My starting point was, going back to my childhood and schooldays, the puzzle of who were the Nephilim, that are mentioned in Genesis, Chapter six, as the sons of the gods who married the daughters of Man in the days before the great flood, the Deluge.

The word Nephilim is commonly, or used to be, translated giants... Those were the days when there were giants upon the earth. I questioned this interpretation as a child at school, and I was reprimanded for it because the teacher said "You don't question the Bible."

But I did not question the Bible; I questioned an interpretation that seemed inaccurate, because the word, Nephilim (or Nefilim), the name by which those extraordinary beings, "the sons of the gods" were known, means literally, "Those who have come down to earth from the heavens."

So, what did it mean? This led me to biblical studies and then to mythology and archeology and all the other subjects, including the study of ancient languages, which became my education and avocation. So, my research and my decision to write about it started with a question: Who were the Nephilim?

All the ancient scriptures, the Bible, the Greek myths, the Egyptian myth and texts, the pyramid texts, everything, led to the Sumerians, whose civilization was the first known one -- six thousand years ago. I focused on Sumer, the source of these legends and myths and texts and information. I learned to read the cuneiform Sumerian texts and came upon their persistent and repeated statements that those beings, whom the Sumerians called Anunnaki, came to earth from a planet called Nibiru. The planet was designated by the sign of the cross and Nibiru meant "planet of crossing."

The question thus shifted in my research from who were the Nefilim and the Anunnaki, to what planet is Nibiru? Forced to become proficient in astronomy, I had to learn enough about it to deal with the subject. I found out that the scholars were divided. Some said it (Nibiru) was Mars, which of course was described and known to the ancient people, and others said, no, it was Jupiter. Those who said it was Jupiter and not Mars, had very convincing arguments why it could not be Mars. And those who said it was Mars and not Jupiter had very convincing arguments also.

Being able to go directly to those ancient sources, clay tablets and cuneiform scripts, it seemed to me that neither was right, because the description of Nibiru and its position when it nears the Sun indicated that it could not be Mars, and it could not be Jupiter. And then one night I woke up with the answer: Of course, it is one more planet that comes periodically between Mars and Jupiter; it is sometimes nearer to Mars and sometimes nearer to Jupiter, but it isn't Mars or Jupiter.