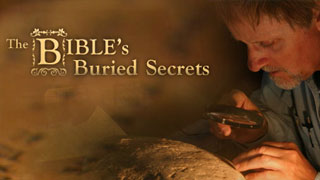 In this landmark two-hour special, NOVA takes viewers on a fascinating scientific journey that began 3,000 years ago and continues today. The film presents the latest archeological scholarship from the Holy Land to explore the beginnings of modern religion and the origins of the Hebrew Bible, also known as the Old Testament. This archeological detective story tackles some of the biggest questions in biblical studies: Where did the ancient Israelites come from? Who wrote the Bible, when, and why? How did the worship of one God and the foundation of modern Judaism, Christianity, and Islam emerge?

"'The Bible's Buried Secrets' is both a scientific detective story and dramatic adventure that digs deeply into the Bible and the history of the ancient Israelites through the archeological artifacts they left behind," said Paula S. Apsell, NOVA Senior Executive Producer.

NOVA travels to several excavations of ancient cities in the Near East, filming newly discovered remains and interviewing leading archeologists and biblical scholars. These in-depth interviews, along with historic works of art, ancient artifacts, animations of biblical passages and scenes, and dramatic recreations provide the latest account of the ancient Israelites and how they found their one God, the God not only of modern Judaism, but also of Christianity and Islam.

"To this day, the Hebrew Bible, or Old Testament, is a sacred text for more than three billion people throughout the world," said Gary Glassman, the program's writer, producer, and director. "The film's international team of archeologists and scholars researches biblical texts and examines artifacts and ancient manuscripts to illuminate how the concept of one God emerged to later form the foundation of the three great monotheistic religions."

The film's investigation of biblical archeology reveals provocative new insights. One vital clue to the past is an inscription discovered at Tel Dan in Israel that refers to the "House of David" the first text outside the Bible to confirm that King David actually existed. Another important find is a carved Hebrew alphabet in fact, the earliest complete Hebrew alphabet at Tel Zayit, an excavation site southwest of Jerusalem. This alphabet suggests the existence of a literate royal court at the time of David and Solomon, the 10th century B.C., raising the possibility that scribes could have written portions of the Hebrew Bible at that time.

Perhaps most extraordinary, the discovery of pagan idols at dozens of archeological sites throughout biblical Israel challenges old assumptions about the rise of monotheism. The idols prove that some ancient Israelites continued to practice polytheism until the time of the Babylonian Exile around 586 B.C., centuries later than previously thought.

Filmed on location throughout the Middle East, the film transports viewers into the world of the Old Testament through guided explorations of ancient ruins and advanced digital animation techniques, which bring sacred places, including the long-lost Temple of Solomon, to life. As part of the project, NOVA commissioned a hand-crafted, illustrated Bible a bound collection of artwork featuring images of ancient frescoes, illuminated medieval manuscripts, and paintings by European masters. These striking visuals evoke memorable scenes from biblical literature, such as God speaking to Moses from the burning bush and David as he slays the giant Philistine warrior, Goliath.

According to Apsell, "In addition to exploring the historical authenticity of the biblical narrative, this powerful intersection of science, scholarship, and scripture also provides a unique insight into the deeper meaning of biblical texts and their continuing resonance through the centuries."